Now that Donald Trump has proven everyone wrong and won the Republican nomination, it’s time to seriously examine the repercussions of a Trump presidency. Unfortunately, he, perhaps more than any other candidate, is difficult to assess. Normally, we weigh the voting record and past public statements against the campaign promises and positions taken by the candidate.

Trump obviously has no voting record; he’s flip-flopped on seemingly every meaningful issue; and the few specific policy proposals that he has revealed have been waived off by his campaign staff as mere suggestions or starting points in negotiation. 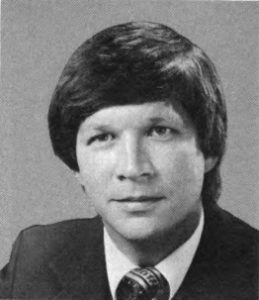 To make the assessment more difficult, Trump admitted in a press conference that he had delegated supreme court nomination to the Heritage Foundation. And he reportedly offered John Kasich full control over “domestic and foreign policy” as vice president so that Trump could concentrate on “making America great again.” 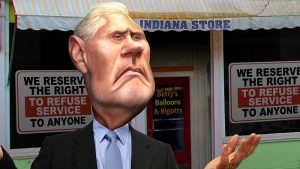 Will President Trump be a cheeto-fascist tyrant who torments minorities, seals borders, mobilizes a police state, and imprisons journalists and political opponents? Or does he just want the title, prestige, and lucrative nature of the presidency – in which case we should be studying up on the record of Mike Pence? (Hint: it’s terrible.) Either way, irreparable damage has already been done to our nation by his reckless campaign.

Candidate Trump initiated his run for president by calling our Mexican neighbors rapists and murderers. He oafishly demands that Mexico pay for a nonsensical border wall. He promises to track down and deport 11 million undocumented immigrants. Trump knows these despicable acts would demand an unprecedented police state at an ungodly financial cost.

He reportedly admitted off the record that he isn’t serious about the whole wall thing. I doubt that he really cares much about immigration at all, I think he’s just playing call-and-response with the immigrant-hating Republican Party base. If anything, he might waste money on more border agents and drones; perhaps he tries to ban sanctuary cities, or states from issuing licenses. But if you are one of those 11 million people or their loved ones, who are American in every way but on paper, that’s not a gamble that can be taken. And the hatred being spewed toward your community cannot be unheard or unfelt. 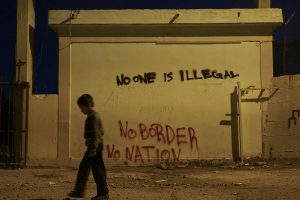 Candidate Trump has promised to ban Muslims and shutter mosques. Unfortunately, hardly anyone defends Muslims (aside from Jews, who know from experience that religious bigotry will inevitably find them when allowed fester), so who knows? Trump will certainly have the NSA violate the 4th Amendment and spy on mosques (more). He will definitely shun victims seeking refuge from terrorism. He has promised to “bring torture back” and meticulously murder innocent family members of suspected terrorists. He couldn’t possibly be anything but counterproductive with Daesh (ISIS) or Syria (or Yemen, or Somalia…). And if you are one of the three-point-three million Muslims in this country, nothing you say or do can stop the rampant spread of Islamophobia which Trump has exacerbated with his incessant fear-mongering hate-speech.

On foreign policy, Trump claimed that he advises himself because he has such a “good brain.” He has asserted that every country (and Japan specifically) should have nukes. He’s given Putin the go-ahead to invade our Eastern European allies by saying he wouldn’t necessarily fulfill our (NATO) treaty obligations. He praised Sadaam Hussein for killing terrorists. He awarded Bashar al-Assad an “A” for leadership. He gave Kim Jong-un “credit” for taking control. He was all for the Iraq invasion, before he was against it. He was all for the assassination of Gaddafi, before he was against it. He’s wholly unfit, he’s pathetically and blatantly uninterested in geopolitics, and he’ll be surrounded by the same old war mongers from the pentagon and intelligence agencies. 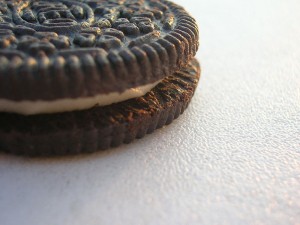 Image by Angel Caboodle via wikipedia

Trump says China and Mexico are “killing us” on trade, and that he opposes the TPP. His opposition is a major plank of his faux-populism. However, as we all know, Trump shirts and ties are made in these countries. He will happily sign the TPP into law, and claim that he got some meaningless win in negotiations to save face. We can only hope that he isn’t stupid enough to start a trade war with China.

He claims that he’ll drive the deficit down by renegotiating the value of government bonds and printing more money. Most economists insist that this would cause the interest rates we pay to foreign investors to soar and the value of our dollar to plummet – plunging our own economy into recession and throwing the worldwide economy into chaos in the process. (I don’t necessarily agree with most economists on hyperinflation. That said…)

Trump knows nothing about economics. He knows unscrupulous lawyers who uncover legal ways to defraud those with less power. He knows nothing about business outside of marketing. He simply sells his name for buildings and gold courses – a brand whose value is based solely upon Trump’s perceived personal wealth. Steaks, wine, cigars, magazines, airlines, bottled water, football teams and leagues… All of his own businesses ventures have been utter failures. All he does is lie and cheat and defraud and drag people to court. 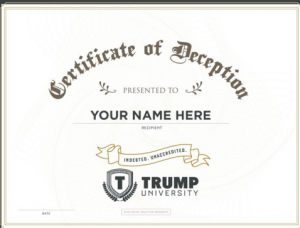 Image by wikipietime via wikimedia commons

He has been caught conflating revenue with profits to publicly inflate his wealth. Yet for years he has been taking advantage of tax credits which are only available to couples earning less than $500k. He scams people with fraudulent universities and fake real-estate classes. Trump is a con artist. He is a fraud. He is a failure and a punchline.

Coincidentally, he knows nothing about tax policy. He claims that he wants to raise taxes on the rich. His tax proposal would, of course, do the opposite. For his part, he has promised to eliminate the carried interest loophole. But overall Trump would, as any good republican, lavish the wealthy with more and more while inflicting austerity upon everyone else. Same old trickle-down nonsense we’ve been beaten down with for 35 years. Same old deregulation dogma allowing corporate donors to pollute the environment and abuse their employees more. Same old socialization for the rich and rugged individualism for the poor. Same old privatization of profit and socialization of cost. Same old rigged economy. 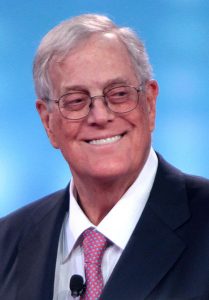 Image by Gage Skidmore, CC by 3.0 via wiki

Candidate Trump bemoans a rigged political system. He bought the Clintons off in the past and they came running to his wedding when he called. He rightly states that candidates are beholden to their superPAC donors. But what would he do to fix it? He hasn’t offered anything at all to get money out of politics. He claims to be self-funded. He claims to be so rich that he doesn’t need the money and won’t owe any favors. In reality, he does take superPAC money – he just couldn’t  land any big money donors like the Koch brothers or Sheldon Adelson. Instead, he has been begging foreign leaders for campaign cash (which happens to be highly illegal, aside from the betrayal of his supporters).

That Trump is a slippery guy. Especially so given an inept corporate media unwilling to challenge the powerful. A media who have replaced objectivity with neutrality – who’ve traded acquiescence for access.

Trump has in the past referred to himself as “very pro-choice”, yet recently insisted that women should be punished for abortion. He lamented that wages are already too high, then asserted that “people have to get more.” He claims that climate change is a conspiracy by Chinese scientists, yet cited global warming as the reason for a sea wall at a Trump golf course in Ireland.

He says that he was the establishment when he was buying off politicians, but that he is now the outsider candidate (and establishment again as once elected – just this brief and convenient break from the establishment in pursuit of his faux-populist run for the presidency).

The man is a weathervane. And there are already concrete consequences whether or not Trump manages to get himself impeached as president. With his boorish behavior – making penis jokes, casting aspersions upon the appearance of other candidates’ significant others, calling another candidate a “pussy” and handing out sophomoric nicknames – he has violated norms of acceptability which cannot be erased. He has demeaned POWs and the disabled. He blames our first black president and Black Lives Matter for racial tension and police killings. He has encouraged his followers to physically attack protesters, and promised to cover legal costs if charged. He eggs on a mob who calls for the jailing and assassination of political opponents. He cordons off and verbally attacks the media at his rallies. He bans media which report negatively on him, and sues satirists and comedians for shaming him. 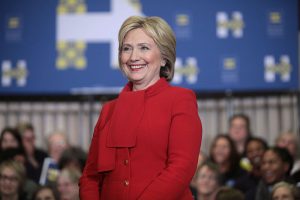 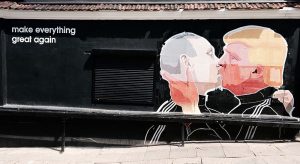 Image by Rasagri via wikimedia commons

Donald Trump is a simpleton. He is intellectually incurious.
He is thin-skinned and ego-maniacal. He is a bully and buffoon. He has the makings of a neo-fascist dictator who could literally be the last president of the United States (pull a Putin, with Pence his Medvedev). Trump says that he wants to make America great but he hates everything great about America. And even if we are lucky enough to have Hillary Clinton as president, Donald Trump will have already convinced an unsettling number of aggressively ignorant racists and bigots – white nationalists, homophobes, misogynists, religious persecutors – that their hate-filled and violent rhetoric is perfectly normal, acceptable, and deserves to be reflected in public discourse and policy.