Twelve-year-old Tamir Rice was playing in a park across the street from his home in Cleveland. Video shows young Tamir picking up snow with both hands and throwing it in the air. Kicking at piles of snow. Tamir was also playing with a toy gun. A 9-1-1 call was made. Three times the caller suggests that he thinks the gun might be fake. And states that it’s wielder was a juvenile. But that people were concerned. Video shows a patrol car pull up feet from Tamir. Officers exit from each front seat. Tamir was shot and killed within two seconds. His sister was on the scene within moments. She was handcuffed and placed in the rear of the patrol car with her brother laying dead just yards away. Tamir’s mother was warned that she would wind up next to her daughter if she wasn’t calm. By the killers of her child.

Police said that they had instructed Tamir to drop the gun three times, before he reached into his waistband. In two seconds time. And that he looked 20. Tamir Rice was 12. He was a child at a park doing the things that children do at parks. And they said that he looked 20. Twenty? They mentally took his childhood from him, in assuming his adulthood. Before they literally took his childhood, in the taking of his life.

Look a’here, fellow pasty-Americans. We have a real, substantive and systematic problem with racism in this country. And it’s on us. We literally started it. We’ve perpetuated it. And even now, we either deny it still exists, or simply blame black people for all that ails their community. 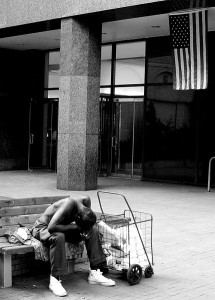 And does it ail. Black people die young. Shorter life expectancies than whites by 3.8 years. Now that probably has more to do with socioeconomic status than race. Speaking of, average white household wealth is over 20 times that of blacks. The unemployment rate of blacks is roughly double that of whites. Black people make up just 12% of the population, but comprise 39% of the prison population, including 40% of death row. Less likely to graduate, to own a home, or a business. More teen pregnancy. Less likely to marry. Et cetera.

Some us of look at these things, and it only reinforces stereotypes. That blacks are particularly violent. Inherently dangerous, sometimes with super-human strength. Sexually insatiable. Unusually slothful. And always fucking late (see what I did there?).

But why? What is it about black people that makes them that way? The answer is – nothing. Nothing at all.

We have to talk to each other. When you talk to people who seem totally different from you, you learn that you have a lot of things in common. We all have the same problems and the same joys. We all have families we love and bills to pay. We’re all the same. It has been asserted that we are all within about 50 cousins of one another. All of us. On the planet. Seven billion of us are basically one big family. Race is just a social construct. We are different colors only because our ancestors lived in different climates. There was more or less sun, so we have more or less melanin in our skin. That’s it. We are all homosapiens.

And yet, Tamir Rice was gunned down in two seconds, presumed to be an adult.

There was a study which people were shown pictures of various individuals, and asked to guess their age. Black children were assigned an extra 4-and-a-half years. We as a society take the innocence from black children at a much younger age than white. We assign more culpability to black children. Children.

There was another study, like a video game an individual would appear on the screen, and if they have a gun, you pull a trigger. On-screen black characters were shot in the study both far more often, and much more quickly, than white. Or a similar study in which random faces are shown along with the word good/bad. It takes far longer to press keys associating good with black faces. There have been studies which have shown that black hands holding an item return lower bids on ebay. And shown that otherwise identical resumes with black sounding names are far less likely to receive a response.  And that teachers have lower expectations for black students…

We have to get past the stereotypes. And it’s not easy. It’s everywhere. There are no black imoji (for now, at least). Who cares, right? Until fairly recently, all of the dolls were white, too. Most all of the characters in the movies and on television screens were white. All of the comic books. All of the heroes. White. The hero even wears a white hat. The villain wears the black hat. Has a black heart. White is purity and light. Black is evil and darkness.

Even today, black men are rarely leading men. Often cast as the thug, the gentile giant, or the jester. Black women? Jezebel, Mammy, and the strong black woman.

The media is a big driver of stereotypes. And the music doesn’t help. Don’t get me wrong, I love Tupac. Love Biggie. I even listen to some Brotha Lynch Hung from time to time, which is about the most violent and honestly sadistic music one could possibly produce. Thought Eminem’s most despicable songs were hilarious, too. It’s entertainment. These artists (with rare exception) aren’t actually the kinds of people who do the violent things their songs depict.

As Tupac once said, he was communicating the fables of his community. Telling the stories of people and things he saw. Not what he necessarily did or thought personally. As violent as Hit ‘Em Up, and as sexually explicit as Thug-N-U, Thug-N-Me – juxtapose those with the tenderness and affection of Keep Ya Head Up and Brenda’s Got a Baby.

Maya Angelou’s words continue to inspire generations. I Know Why the Caged Bird Sings. Oprah built an empire. Jordan owns the team now. We celebrate MLK from coast to coast. We even have a black president, Barak Hussein Obama. Hussein! See? Haven’t we come so far? This is America. Anyone can make it. All it takes is hard work and discipline.

In fact, these are the exceptions that prove the rule. That our black brothers and sisters are as talented and gifted as any. That given opportunity, they are certainly as capable.

And this is where we start talking past each other.

When I say that black kids are far more likely to be suspended or expelled from school. That we are arresting kids at school, the school-to-prison pipeline. And as with the criminal justice system writ large, blacks are disproportionally involved. That black kids are far less likely to graduate from high school, or to earn a degree. Which makes it more difficult to get a job. Harder to get a decent-paying job. Without property or much income, you can’t get any credit. Can’t get a loan to start a business. The strains of poverty are difficult on relationships. Especially when suitors are in-and-out of jail and often unemployed. When young men see the stereotypes, and see them played out in real-time. See talent in themselves and in people around them, who couldn’t catch a break. Or made that one mistake and could never recover. Worse, were cut down before their time, and whose efforts could never be realized.

The future might not seem like it has much to offer, and playing it straight has no guarantees.

Our War on Drugs pushes industry onto an extremely profitable black market. And pushes large sums of money onto the streets (even legal cannabis dispensaries have this problem). We target the black community, who use and deal drugs at roughly the same rate as whites, yet are far more likely to be charged. Black-on-black crime? Everyone is far more likely to be victimized by someone of the same ethnic background (save Native Americans). Blacks are aggressively charged by prosecutors, and given harsher sentences by judges if found guilty, usually by majority-white juries. When they get out, we make felons check a box on job applications in many states. Won’t let felons vote in many states. We only reinforce the stereotypes. That they aren’t fully equal. Aren’t sufficiently American or human. Don’t deserve the benefit of doubt. These are problems we need to address. 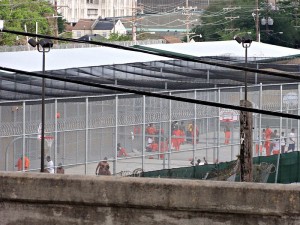 The response from a lot of white folks is: Don’t blame me! I have black friends at work. I smile and hold the door open for elderly black people. A lot of that stuff is just things that poor people have to deal with, not just blacks. I’m not rich, either. Life isn’t easy on anybody. I earned everything that I have. I worked for it. I stayed out of trouble. Why are you telling me about black people problems? White privilege? I didn’t do it. I don’t use the n-word. I’m not racist. Are you calling me racist? Are you calling America racist? Racism against blacks is over. Slavery was a long time ago. Blacks have rights, too. Make better decisions. Pull yourself up by your own bootstraps. Oprah and Obama.

Well, here’s the thing. Either black people, by virtue of their skin tone, are simply inferior. Or, we have a system which suppresses their efforts. It has to be one or the other.

Admitting that we systematically oppress the black community does not mean you hate America or think all white people are racist. It’s not blacks v whites. And it’s not blacks v US of A. Admitting that whites are more likely to be given the benefit of doubt, does not mean that white people haven’t earned anything. We just need everyone to be afforded the same privilege. We all have to live together, and we must strive to make things better for all of us. But we have to diagnose what ails us before we can find remedies. We have to face the truth. It cannot be ignored.