Eff-you Populism of The Donald 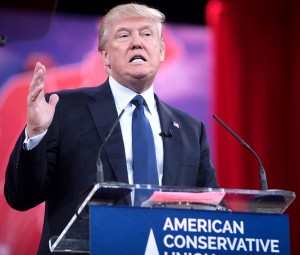 While comedians and satirist are undoubtedly giddily chortling away at the prospects, I never thought I would feel compelled to scribble my thoughts on one Donald Trump. To be clear, The Donald is an abhorrent abscess, a bombastic buffoon, a cartoonish clown, who looks about as intelligent when he speaks as are the words spewing from his gullet. But, given recent events, I have little choice but to comment on Mr. Trump and his brand of eff-you populism, in all its glory – and what his meteoric rise says about the republican base.

The Donald’s name has been gracing headlines from coast to coast non-stop since the announcement of his presidential campaign. In his rambling, unscripted screed, he proclaimed that;

Pressed in later interviews, Trump asserted that Mexican government negotiators were somehow picking and choosing whom crosses the border, given their superior negotiating skills to those of President Obama.

While I won’t waste too much time on these ignorant and xenophobic assertions – why, pray tell, are the cartels still in Mexico, if the Mexican government gets to choose whom to export to the US? Are women and children – families – more of a burden to the Mexican government than are the cartels? More substantively, net migration from Mexico has been less than zero since 2010, the first year that that was the case, given fewer prospective jobs here as result of the Great Recession. Also, natural born citizens are far more likely to go to prison than immigrants, whether documented or otherwise. So The Donald’s entire premise is faulty, aside from ugly.

A few more odd claims from The Donald; he will force Mexico to pay for an impenetrable wall, because of his superior negotiators, of course. That there are up to 31 million undocumented immigrants in the United States, when the broadly accepted number is roughly 11 or 12 million. That he will win the Latino vote, when Mitt Romney managed but 27%, because jobs. Speaking of, Trump proclaimed that “I will be the best jobs president God ever created.”

In response to Trump’s nonsensical, nativist ramblings – ties were cut by NBC, Univision, NASCAR, Macy’s, the PGA, ESPN… Chef Jose Andres backed out of a deal to run a Trump restaurant, Rosalyn Sanchez backed out of co-hosting Miss USA. The cities of Baltimore and New York are reviewing their relationships with Trump. 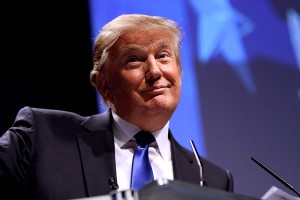 In the most Donaldest of reactions, #Trumplestiltskin thumped his spray-tanned chest at the prospect of having secured nonrefundable deposits from both ESPN & the PGA, and could thus re-book and turn double profit. Squee! Also declared that it was he who had severed ties with Macy’s and NBC, as opposed to vice versa, because of course he would.

This is the same Donald Trump who still to this very day maintains the notion that Barack Obama’s place of birth is an unsettled issue. Who claims to have a secret and fool-proof plan to defeat ISIS (Daesh), which he refuses to share, because he wants credit when he inevitably defeats them personally (at least recently he has clarified that oil should be targeted, a good start). Who is an anti-vaxxer, and a climate denier. Who believes that Ebola doctors “must suffer the consequences.” Who has said that he has a “great relationship with the blacks.” Mr. Trump posits that if anyone rents or is employed from/by he or one of his business partners, then that person’s entire community must automatically love The Donald by default. Trump has stated his opposition to same-sex marriage, yet with a straight face refuses to admit the cognitive dissonance of espousing traditional marriage, given his being thrice divorced.

Mr. Trump was born into wealth, the heir of a real estate mogul. As a trust-fund baby, Donald used his father’s name and his own shady business practices to amass vast wealth during an era of deregulation and corporate tax largess. Bankrupted more times than divorced, Trump only allowed his private funds to be put in harm’s way until his first bankruptcy. Since then, he rakes in money personally throughout the entire processes of bankrupting a given company – socializing the expenses while privatizing the gains, standard operating procedure in an oligarchic corporatocracy.

Famous for his cotton candy-esque, orangutanean mane, this is not The Donald’s first flirtation with the presidency. He once proclaimed that he and Oprah Winfrey would be an unbeatable ticket (Oprah, of course, threw a tremendous amount of shade on said notion). The past three occurrences were seen as little more than self-promotional flailings of an egomaniacal nincompoop, and this time would likely be no different. After all, Trump is nothing if not a miracle of brashness & branding. In order to really run for president, financial filing are required which could potentially render moot the decades of propaganda equity involving the vast Trump wealth, which is basically his entire brand. Those filings are due mid-July ‘15. (Though there are dual 45-day extensions, which Trump has said he won’t use.)

Yet somehow, Trump has found a loophole of sorts to assist in his journey. His racist and xenophobic slurs keep his name in the national media, and his showing in the national polls assures him a spot in the republican debates, which begin before his financials are due, given extensions. This while other contenders who would at present be left out of the debates, such as John Kasich or Bobby Jindal, are spending their time smooching the hind-quarters of billionaires, in order to pay for local ads to run in New Hampshire and Iowa, early primary states. Similarly, Trump may not need to rely upon any donors at all in order to win the primary, and the party infrastructure would have no choice but to back him if he were to attain the nomination, so no one has any leverage to tell him anything about himself whatsoever, be them party leaders or the donor-class.

Not that they aren’t trying. Republican National Committee Chair Reince Priebus reportedly implored Trump to tone it down. Conservative Washington Post columnist George Will has implied that if Donald Trump were a democratic operative posing as a republican, he would be doing nothing different than he is now.

His presence at the debates will pull the conservative candidates further and further right with every verbal barb, with every “idiot”, every chest-thumping insistence or non-apology, every degredation of immigrants and/or brown people, he will be in essence berating his fellow candidates into making more and more outlandish statements in order to prove their comparative bonifides of right-winginess. It is very hard to imagine a scenario in which Trump would find himself inhabiting 1600 Pennsylvania Avenue come January ’17, after all his overall disapproval ratings have polled as high as 55%. Despite the exposure loophole he has unearthed, money still rules the post-Citizen’s United day, and both Scott Walker & Marco Rubio have garnered the support of both the Koch brothers, and Sheldon Adelson, while main stream media pushes Jeb! 2016. Donald Trump will, rather, greatly increase the chances that a handful of progressive justices are appointed to the bench in the coming four-to-eight years. Huzzah and kudos, sir! 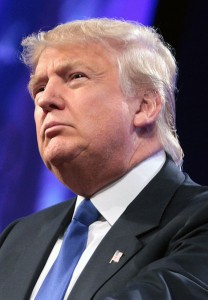 No matter, Trump has shot to the top of the charts. Consistently in the top three, he is now finishing as high as first in recent polls for republican nominee. Sure, Herman Cain and Michelle Bachmann had runs at the top last time around, but they plummeted with the increased scrutiny associated with residing atop the leader-board. Trump, in contrast, has risen with increased coverage. Insisting repeatedly that his inflammatory remarks are justified, especially since he has personally inserted the supposedly yooge issue of immigration into the headlines -The Donald is as unapologetic as he is offensive.

More importantly, what does the ascendance of a xenophobic, hate-spewing, walking, talking punch-line say about the base of the republican party, regardless of his staying-power? If Donald Trump is truly a reflection of the values and demeanor of conservatives in America, then perhaps a long look in the mirror would be well-served. 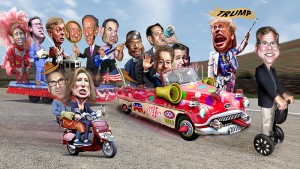