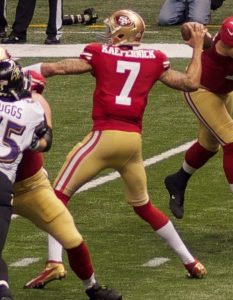 In a country beset with racial tension, it has taken the kneeling of a backup football player to inconvenience us into taking note. For his part, San Francisco 49ers quarterback Colin Kaepernick didn’t promote his action. When finally asked, after three weeks of protest, Kaepernick eloquently spoke against the killing of unarmed black men by police officers across the country going unpunished.

Replies have run the gamut, from fellow footballers Jerry Rice tweeting that “All Lives Matter”, Rodney Harrison questioning Kap’s blackness, and Richard Sherman taking issue with the manner of protest (Drew Brees, Trent Dilfer…). Teammate Eric Reid, in solidarity, took a knee during the national anthem alongside Kaepernick. As with dozens of other NFL players in the following weeks (including Marcus Peters, whose raised right fist was accompanied by a left arm linked with teammates). As with USWNT Megan Rapinoe. And hundreds of high school & college football & volleyball players & coaches across the country. While #VeteransforKaepernick was a trend, so too was the backlash.

Veterans taking issue with Kaepernick’s protest tweet-plied #Dontspeakforme. Kids who knelt were called “nigger” by their own teammates, and received death threats from supposed adults. A First Nation girl had her grade docked for failing to participate during the Pledge of Allegiance (though she hadn’t stood for years prior). Players, even military veteran coaches, have been threatened with dismissal should they fail to stand for the anthem. Principals have threatened ejection from athletic events.

Myriad skilled wordsmiths have put far superior words than I am capable of stringing together on this issue. So I feel like I’m simply parroting folks far brighter than myself. But for the Dabo Sweeneys and the Seattle Seahawks and the Jerry Rices:

The Star Spangled Banner is blatantly fucking racist. Francis Scott Keyes personally owned slaves and fought abolitionists. He was a lieutenant in the War of 1812. The British offered freedom to slaves willing to fight with them. The black Coastal Marines laid a whoopin’ on Keyes and crew. He held a grudge and wrote his little poem (while trying to free a captured friend aboard a British ship) about bombs and battle and we just left out the part about viciously murdering free black men. 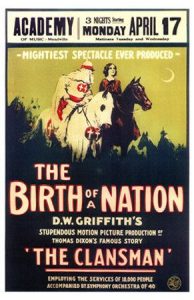 A hundred years and we had put a melody on it and made it our special song after getting riled up with racist fervor around Birth of a Nation.Another hundred years – after being riled up by a browning populace and a black man in the White House – a black quarterback alternately sporting an afro & corn-rows jump-starts an effort to woke a nation.

But this is America. And while the calendar says 2016, it may as well read 1966. Black children are still being threatened and attacked for peaceful protest. Athletes are still being punished for silent protest. Protesters are still called unpatriotic and anti-American. Marchers are still criticized for the inconvenience. Movements are still infiltrated and surveilled by the federal government. Activists are still jailed and still turn up dead.

And the message is the same: I am a Man. It is only human nature demand the common decency of being seen and heard. For all of these years we have been ignoring claims of police brutality and institutional racism. What about Chicago?!? Black on black crime! WWMLKD? Personal responsibility! Where are the fathers?!? 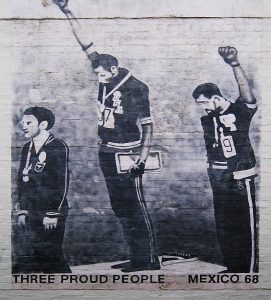 Briefly, folks in Chicago been organizing and actively working for solutions and you never noticed or cared; and BLM has a detailed policy-plan. White-on-white crime is just as significant – only Natives deviate from the same-on-same statistic. You hated MLK. You hated Ali. You hated John Carlos and Tommie Smith. Black fatherseat more meals with their kids and drive them to/from school more than white fathers (and many that do not cannot because they’ve been locked up due to our racist War on Drugs and private prison industry). Black Wall Street. Red-lining & houses on contract; school-to-prison pipeline, stop & frisk, three-strikes, mandatory minimums, dwb…

Colin Kaepernick is specifically protesting police brutality. Silently & peacefully. Yet 49ers “fans” are burning Kaepernick jerseys in effigy. Actors promising to boycott the NFL. And perhaps most disgustingly, Dabo Sweeney’s ignorant self – as is done every single time any POC protest and while insisting that he does not necessarily disagree with the message – yanked the ghost of MLK out of his sorry, white ass in an effort to bash (mostly) black protesters. Reverend. Dr. Martin. Luther. King. Jr. The guy most known in US history for protest. Arrested dozens of times – for protesting! 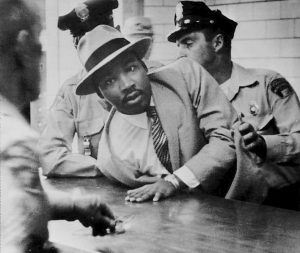 People prefer comfortable lies to the uncomfortable truth. They want a docile MLK. They want a meek Rosa Parks. They want well-fed slaves with kindly masters who only wanted their property rights and freedom from an oppressive federal government.

They want black folks to celebrate their supposed freedoms by shutting their mouths and standing up straight and doing as they’re damn well told. Don’t protestthat way (or that way, or that…). Be grateful and be quiet. Implicitly – sometimes explicitly – or leave!

Talking heads from political and sports punditry predicted Kap would be cut from his team. A former-quarterback-turned-analyst decried the distraction he was causing to his team. On the contrary, upon rising from his silent protest, he is met with the embrace of teammates. And his jersey sales went from twentieth place on his team to tops in the league.

For those who wrap yourselves up in the flag and use veterans and MLK as a weapon against protesters? Who value symbolism over the humanity of fellow Americans? You don’t care about any of those things. You’re sitting on your sofa during your deplorable ditty. You don’t care that the players weren’t even on the field during the anthem until the NFL cooked it up as a marketing scheme in 2009. Or that millions in tax-payer money is paid to the NFL to use the US military as a prop. You don’t care that the song is blatantly racist. You don’t care about police brutality or institutional racism. You only care about inner-city plight to the extent that you can use it as a cudgel against those most affected. You want to hold the oppressed responsible for their own oppression. You want to tell black folks how they are allowed to protest in your country. You want to obfuscate with jingoistic symbols and faux-patriotism.

No more. These protests are only growing. These issues won’t solve themselves. These voices will not be quieted. Someone had better get to Adam Silver quick, because come November a cadre of tall black men blessed with tattoos and unburdened with face-masks will be taking the floor.